Sometimes, you want to share a Texture that you have created in one application to another application on the same machine. When performance is important, the DirectX Texture Sharing feature should be interesting for you. It let’s you share a DirectX texture between multiple processes – for example, if you want to make a Texture that you have created in Unity available to another program or, vice versa, when you want to use an externally created texture inside Unity. The Texture Sharing feature lets you access the texture with zero latency, instantaneously – nice!

In this tutorial, I will just very briefly explain how to get your external created DirectX texture into Unity using the SharpDX library. However, I will only describe the part on the Unity side; the DirectX-part (the texture creation etc.) will not be covered in this.

Importing SharpDX into your Unity project

Now, inside your project find the DLLs from the NuGet packages (e.g. in Packages\SharpDX.Direct3D11.4.2.0\lib\net45) and copy them into the Plugins folder of your Unity Assets. After a restart, you should be able to now import SharpDX and call the respective functions.

But first, I had to receive the pointer to the shared texture and initialize it inside Unity:

Accessing the shared texture inside Unity

The tricky part is now that Unity tries to hide the DirectX device to you, but you need it for the proper communication with your graphics card. Therefore, I had to find a kind of „hack“ to get the device Unity is using (see code). Once you have the device, you can call your DirectX functions as usual. In this case, you have to call OpenSharedResource and create a new ShaderResourceView on the shared texture. Then you just have to call Unity’s CreateExternalTexture function, passing the native pointer to your ShaderResourceView of your shared texture. That’s it!
Please mind that the Texture you are creating inside Unity of course has to match the Type, width and height of the shared texture you want to access. 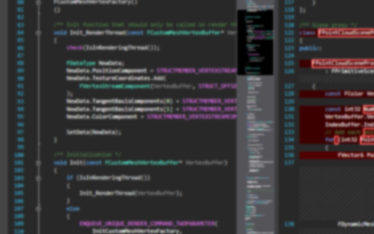 WebRTC.lib Shared/Dynamic libraries [Free Download]
It is well-known that building WebRTC from source can be a quite painful process because the WebRTC library has many dependecies and a very complex build pipeline. In a recent…
32 LikesLeave a comment

Parallel Bitonic Sorting on the GPU – Compute Shader implementation in Unreal
Download the Plugin for the Unreal Engine here: https://github.com/ValentinKraft/UE4_SortingComputeShader The compute shader that handles the sorting: //Since we can't #include private Engine shaders such as Common.ush we have to copy…
42 LikesLeave a comment